CyberGhost VPN is a free utility that lets you browse anonymously, encrypts your data and offshores your internet when using public networks.  With CyberGhost VPN you can freely surf the web irrespective of the type of apps you are using or the location you log in from. It is a tool for protecting your identity that otherwise would be left exposed to the ever-growing politics and business demands. In simple terms, CyberGhost VPN allows you dispense your unsurpassed impression on the Internet, which is precisely none.

What is CyberGhost VPN

CyberGhost VPN works by creating a virtual private network for the user that operates on a robust encryption keeping all data secure during any communications within the system. Once a user is connected to the CyberGhost server, they receive a new IP address. However, unlike the original IP address, the new IP address given by VPN provider cannot be used to identify the user or their internet connection in any case. CyberGhost comes in two versions, a free version that will boot the user offline after six hours, and a premium version that costs between six and ten dollars per month. The free version is good enough for most infrequent users.

What Does CyberGhost Do? 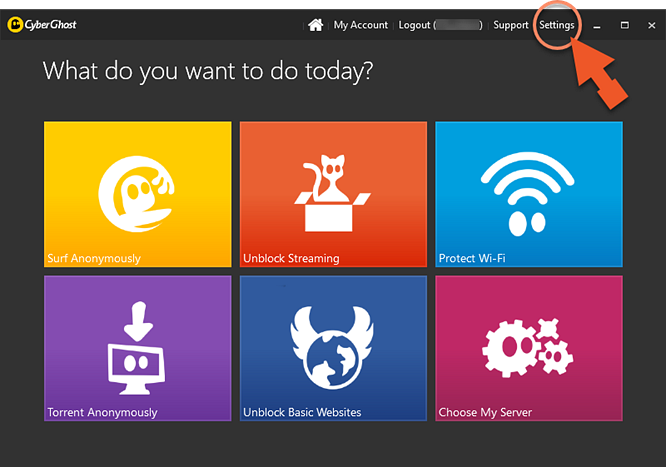 Since CyberGhost VPN will connect you to the servers in your home country, it will remember any wireless networks you use and provide full protection. Public wi-fi does not offer any encryption to the users, and their signals are broadcasted to anyone smart enough to eavesdrop.  Therefore, as a user, you should use CyberGhost VPN at any wi-fi hotspots to prevent hackers from collecting your private information. And since the internet connection between the VPN server and your device is heavily encrypted, a hacker cannot access the encoded data even with any intercept such as packet-sniffing 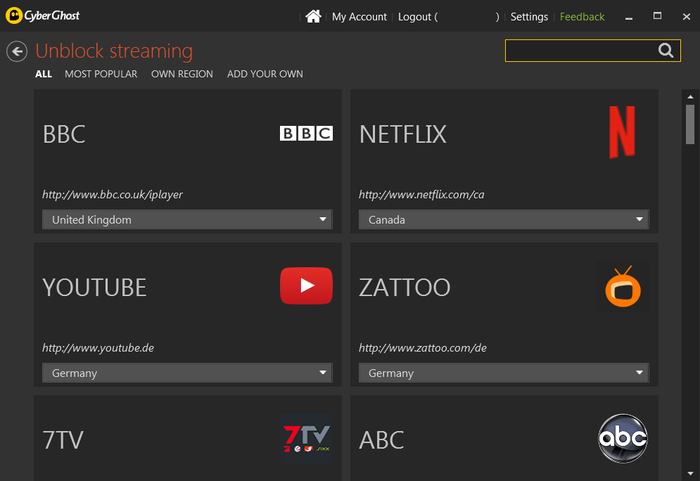 Irrespective of your geographic location, CyberGhost VPN provides you with access to numerous streaming sites. Moreover, the process is entirely automated to save the pain of having to search through many servers trying to find your favorite TV show.  Whether you are a Canadian trying to access your Netflix profile while on travel, you can quickly do that using CyberGhost. The following are among the most common websites you can easily unblock using CyberGhost.

The premium subscription of CyberGhost that is available at an affordable price provides users access to all of CyberGhost’s profiles and features on one device. As a result, a user can use all such features on their mobile device and computer provided they do not log in to the two devices simultaneously.  Moreover, users who prefer a hassle-free experience and want to protect numerous devices at the same time can do so using the Premium Plus License. However, the Premium Plus License is costlier in comparison to the premium subscription and can protect up to five devices simultaneously.

How Much is CyberGhost?

CyberGhost has recently revamped its pricing plans to cater to the needs of all users. The new conventional packages have not only unlimited bandwidth and traffic but also compatible with OpenVPN protocol. Moreover, all the three pricing plans have an AES 256-bit encryption. Depending on the type of subscription, a user can access more than a thousand servers in place, connect multiple devices and access the anti-fingerprinting system. The change from the earlier plans namely the premium and the premium plus accounts. CyberGhost VPN has three major pricing plans. Each of these programs has all the CyberGhost apps, constant customer support and access to fast VPN servers. Below are the new three pricing plans by CyberGhost:

How Secure is CyberGhost?

Security is a crucial consideration when choosing any VPN provider.  According to numerous reviews, CyberGhost is ranked among the top ten VPN service provider. The service is secure, secure and has some great security features. Moreover, it has servers in more than five hundred serves in above thirty locations. Making it a viable choice for users looking to unlock content on the internet. Equally, its IP hiding ability will make all users anonymous on the web, hence securing their online privacy. Consequently, it can be safely said that CyberGhost VPN is safe to use. Below are some of CyberGhost’s security features;

Logs refer to files or information stored by a program to help in removing bugs and also for tracking purposes. CyberGhost has zero records on its servers hence impossible to track the user’s activity across the internet. As a result, users won’t have to worry about any legal issues that often happen with VPN services that keep logs of their users’ activity.

The combination of L2TP and IPsec protocols makes CyberGhost a highly secure VPN client. And since L2TP is not necessarily for encryption, it generates a tunnel while the IPsec, on the other hand, takes of encryption, data encryption, channel security and packet arrival without compromise.

OpenVPN refers to an open-source software that executes VPN techniques used to create secure point-to-point in routed, bridged or remotely accessed facilities. The software uses a unique security protocol featuring SSL and TLS to exchange keys. OpenVPN is capable of navigating network firewalls and address translators. It implements authentication through a secret key, a certificate, a username and a password. CyberGhost VPN employs this software for utmost forward secrecy.

AES stands for advanced encryption standard. With HMAC authentication, it is strong enough to stop all snooping even from the most advanced technologies. AES-256 is the first open source open cypher permitted by the US National Security Agency (NSA) for privileged information. Its greater key size makes it fundamentally unbreakable, meaning that even if the servers get hacked, it would be impossible to decrypt the data. AES-256 similarly has the advantage of being tremendously fast.  Therefore, when browsing using CyberGhost that uses the AES standard, a user will experience no noticeable lag regarding performance in comparison to other protocols.

What Devices Can I Use with CyberGhost? 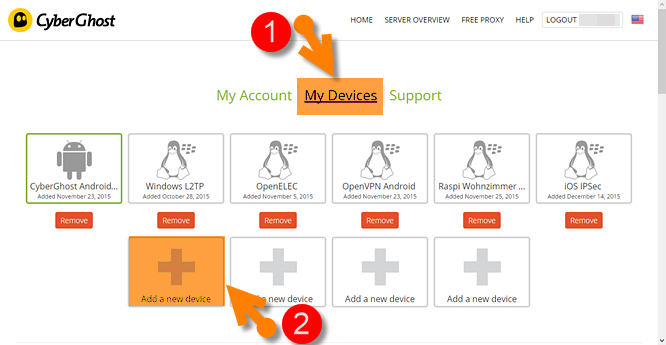 CyberGhost VPN is available for Windows client and supports Windows Vista, 7, 8, 8.1 and Windows 10.  It not only protects Wi-Fi and cable connections but also provides high security.  CyberGhost for Windows client comes with some pre-defined profiles for diverse operations, allowing users to pick a state or server to connect to directly. It is easy to install and use and has extra security features since it is based on OpenVPN

Starting with iOS version 9, Cyber Ghost application is available for Apple devices such as iPad, iPhone and Apple watch. The app is accessible freely from the Apple app store and is entirely functional during the seven-day trial. After the expiry of the trial period, it goes back to a general VPN service. The application is easy to install and use and is highly secure since it is based on L2Tp/IPSec protocols. On installation, it creates individual profiles, but the features are, only available to subscribers

The CyberGhost application is available on the android play store for devices like tablets and smartphones. The app is easy to use and install and does not need any extra configuration since it efficiently works out of the box.

Mac client is available for notebooks and computers that run on Mac OS X.  Mac client automatically logs in users and provides a comfortable and straightforward way to use. The connection is secure and prompts alerts in the case of unintended disconnection. It is easy to install since no configurations are required. Extra security details such as the connection guard, kill switch, ad blockers and a no tracking tool makes it even better. Mac client is based on OpenVPN thus highly secure to use.

For native protocols such as PPTP, OpenVPN and L2TP/IPSec, CyberGhost is available for users who use Linux OS.  While PPTP is a built-in protocol in many Linux distributions, OpenVPN and L2TP/IPSec protocols may require third-party software. However, there is no kill switch available nor a secure connection. Users will also be required to have a CyberGhost account and a paid subscription as well as enough knowledge regarding the manual configurations of the protocol being used.

Selected routers can be configured appropriately to connect with CyberGhost VPN network so that numerous devices can relate to the VPN simultaneously. Users will, however, need to access the router interface for them to change the configuration. Users will also be required to have a router that has an inbuilt VPN client, a CyberGhost account and a subscription as well as enough knowledge of native protocols configuration. Directions on configuring OpenVPN for router firmware for instance DD-WRT are accessible.

Since the Google Chromebook has L2TP support build with it, adding a CyberGhost VPN connection is straightforward.  However, Google Chromebook does not support OpenVPN and PPTP protocols yet. A user will require a CyberGhost account and an accompanying paid subscription as well as sufficient knowledge about configuring the native protocol manually.

Depending on the existing operating system, a Raspberry Pi CyberGhost is usable with OpenVPN, PPTP, L2TP or IPSec.  A user will, however, require a CyberGhost subscription and a CyberGhost account, a supported operating system such as Raspbian and some knowledge about manually configuring a native protocol.

How to Use CyberGhost

For Mac OS, the process is straightforward as outlined below

For iOS, read the following guide to install on your iPhone, iPad or Apple Watch;

Linux users can efficiently use their CyberGhost subscription with any Linux distributions as long as such distribution supports at least one native protocol such as OpenVPN, L2TP, IPSec or PPTP.

Kodi installations can be used with CyberGhost if such installations are compatible with at least of the native protocols namely IPSec, L2TP, PPTP and OpenVPN. Kodi and CyberGhost have compatibility issues, and therefore users should be keen on both. Below is an installation guide:

Such devices include Router, Synology NAS, Raspberry Pi, VU+ Solo 2 and Chrome OS. If your CyberGhost subscription supports either PPTP, L2TP, IPSec, or native OpenVPN, then it is used with your device. You will need a subscription, a CyberGhost account and IPv6 connection. To install, follow the procedure below.

Why NOT Use CyberGhost?

Although CyberGhost is one of the most reliable VPN service providers, it has a few disadvantages as outlined below.

Some of the advantages of CyberGhost VPN include the following

If you are a thinking of a VPN service to apply for the first time, CyberGhost VPN is a good starting point. The company continues to its services in the recent years as seen in many online reviews. To enjoy a wide range of features, users are advised to choose from one of the three paid packages. The subscriptions are not only fast, but are can also be easily customizable through the settings in place. Also, for users who often Windows operating system and desire to access blocked sites that have servers in Europe, this service is an ideal one for you. Also, anyone who wishes for extra security and a peace of mind during browsing can go CyberGhost. Although the service a few drawbacks, such cons do not significantly affect the performance of the VPN service. Moreover, CyberGhost service performance is higher in comparison to its close competitors in the VPN market.